The program was the inspiration behind the creation of the independent JavaScript version known as JScript LOIC and a LOIC-derived version of the web called Low Orbit Web Cannon. Loic is the most popular DDoS and stress testing tool for testing networks and IP Addresses and Networks. It lets you test connected devices to their fullest potential through a DoS attack. Highly recommended to test your network’s stress and security. These are all services that have the primary purpose of disrupting the service. A threat using low orbit ion cannons cannot create a lot of unwanted traffic to have a significant impact on the target. Get More Softwares From Getintopc

To be successful, an attack for it to be successful, thousands of users need to be able to coordinate and simultaneously redirect all traffic on the network. The penalty could be up to 20 years ‘ jail time, a fine, or both. Additionally, the local firewalls are not capable of providing security and defense against TCP as well as UDP floods and the latter can also target and even disrupt the firewall. The WAF, which is also known as Web Application Firewall can protect against HTTP floods, which means the specially designed DDoS protection is also able to prevent TCP as well as UDP attacks. However, LOIC users are unable to channel attack traffic through proxy servers.

In the end, the IP address of their attackers is visible to the victim, making them simple to track. The smaller threats of LOIC HHTP can be mitigated by an internal firewall that lets administrators of servers look through the logs to identify the IP addresses of the attackers in totality and then reduce the requests. However, this method isn’t able to defend against high-level and large-scale attacks that involve many hundreds, or thousands, of attackers, are working together. This low-orbit ion gun was employed in 2008 by an anonymous attacker to attack the Church of Scientology websites as a response to the legal actions that the church made to remove the Youtube videos. LOIC was also employed in 2010, when supporters of Wiki Leaks attacked the websites associated with Visa as well as Master card, in reaction to credit card companies preventing the payments made for Wiki Leaks. It is crucial to remember the users to you should use this tool in a cautious manner.

Within the entire project, there have been an overall 256 commits which were made in three branches, with six distinct contributors. blocked is extremely likely that this application is malicious or includes undesirable packaged software. Beware that this program could be dangerous or could contain unwelcome bundles of software. 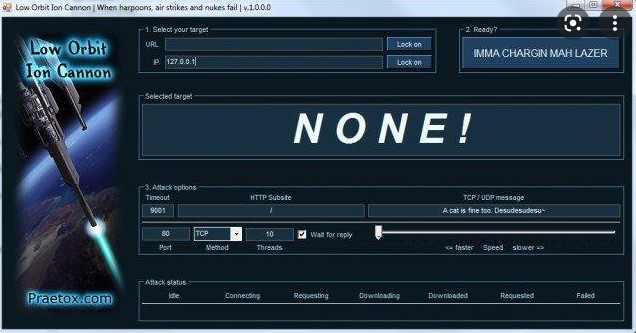 It’s a network stress testing program, however, currently, it is being employed with malicious intent since it has been made open-source. It has earned a great deal of popularity due to its use by hackers of the group anonymous, as well as users of 4Chan. 4Chan forums. Low Orbit Ion Cannon was originally created through Praetox Technologies as an open-source network stress testing tool. It lets developers subject their servers to extensive network traffic to test their diagnostic capabilities, however, it has since been modified within the public domain by a variety of updates and has been extensively utilized by anonymous as ADDoStool.

The Low Orbit Ion Cannon is an open-source network stress testing and denial of service attack application developed by using C#. LOIC was originally developed through Praetox Technologies, however, it was later made available to the public domain. It is now hosted on a variety of open free platforms. The Low Orbit Ion Cannon is a widely accessible, open-source program created by Praetox Technologies used for network stress testing, and also a denial of service and distributed denial of services attacks.

It filters out unlegitimate connections in the middle and ensures that only pure traffic gets to the server. The LOIC version that was used in the attacks mentioned above contained the so-called HIVEMIND mode. It utilized the internet’s relay server to steal the junk traffic that users generate and thereby permitting individual perpetrators to establish a botnet to create attacks with no prior coordination. This is a common tactic because the owners of slave devices can claim they weren’t the victims in an uninvoluntary botnet. Security experts interviewed by the BBC said that well-written firewall rules could block the majority of traffic generated by DDoS attacks using LOIC, thereby preventing attacks from working fully. In at the very least one instance filtering out every UDP as well as ICMP traffic prevented the LOIC attack.

How to Get Low Orbit Ion Cannon for Free

We do not recommend or endorse the application of this program in the event that it violates any of the laws. This includes actions that could result in civil or criminal liability. LOIC is intended for education only and is intended to assist server owners in developing the “hacker defense” attitude.

One computer operating Low Orbit Ion Cannon cannot produce the required TCP, UDP, or HTTP requests in a single session to overpower a web server. It is necessary to have thousands of computers that all target the same server to have any effect. This IRC-based “Hive Mind” mode enables the user of LOIC to connect their version of the LOIC program to an IRC channel to receive information about a target as well as other attack parameters through the IRC subject message. The Low Orbit Ion Cannon knew as LOIC Free Download is an application. The tiny orbit cannon was first developed by Praetox Technology.

To ensure that dangerous attacks do not occur for a serious attack to occur, you need hundreds of people to collaborate in attacks that are simultaneous and have the same target. Although LOIC can be simple to use and reliable, however, it doesn’t attempt to disguise their IP addresses and the majority of the volunteers who run the program are unaware of this lack of privacy. If any kind of attack isn’t directed through an anonymizer like Tor, I2P, or some other proxy server an IP address of the attacker could be tracked by the target.

An ISP could then utilize the list of logged attack IP addresses to determine those who are involved in the attack, allowing proper law enforcement action to be initiated against the perpetrators. ImpervaDDoS protection on the other hand can be used to reduce UDP attacks. This protection system uses Anycast technology to distribute an attack’s burden over a global network of scrubbing servers that detect and block malicious packets using a deep examination of the packet.

HIVEMIND mode connects the client with an IRC server to allow it to be managed remotely. Be aware that your client could be manipulated to do inappropriate things. We’re here to assist in case you require assistance additional services or help with your queries regarding our solutions and products. Like last year, this year we created a list of the most popular tools from January until December 2021. Project Chanology- Launched in 2008 The campaign focused on members of the Church of Scientology for issuing an infraction of copyright to YouTube in an attempt to get some of their videos taken down.

We’ve talked to you about the Low Orbit Ion Cannon virus Free Download such as the ways it could be used and the ways in which it can be put off. You can download the LOIC tool and the source code by clicking on the links we have provided. If you find this article helpful you can leave a comment in the comments section below. Unfortunately, this release isn’t available, and it’s an update of the official tool below, with an alternative naming convention.